Doom has a DVR the size of a Best Buy. Doom misses nothing. But of course the management of a global empire and the constant annoyance of the Accursed Richards Clan delay Doom's free time with, as the Doom Gran might say, his stories. It was only this weekend past that Doom saw Chopped All-Stars.

But it aired in April, Doom hears you mew. DOOM IS BUSY. DOOM JUGGLES MUCH.

Doom cares not much for reality shows, which are in truth, game shows. They are contestants. They contest. They seek glory, albeit a glory a fraction of a fraction of that Doom enjoys every moment of each day Doom allows to exist. Doom's tolerance for cooking-themed game shows is tiny. Iron Chef, of course, is a staple, but Doom would enjoy seeing them prepare food while actually wearing iron as does Doom. Iron Chef America is a middling spinoff, and one that will ever be dismissed until Alton Brown himself approaches the cutting boards.

Chopped has grown on Doom. After initial awkwardness, the show eventually found its groove, as Doom's nephews say, and Ted Allen is an easy TV presence.

(Doom correctly identified him as the breakout star of Queer Eye for the Straight Guy. Desperate, desperate Carson was practically licking the camera, and Jai begged it to pet him with approval. Ted, in contrast, played it wry. He did not sell himself. He sold the premise, and Doom respects that. Ted Allen: Doom Approved.)

As with Iron Chef America, Doom desired the judges climb down from Mount Judgment (the mere piedmont of the Alps that is Doom's perpetual perch) and clutch a skillet

As in all matters, Doom's whims became reality, and All-Stars, a charity tournament of Food Network names, featured a round pitting judges against judges. Other rounds featured Food Network Star competitors and veterans of other shows. The tournament final included Aaron Sanchez, a regular judge, and it is here Doom realized how fickle karma can be.

What if he won?

Doom found himself yelling at the Doomscreen TV, demanding with each of the three rounds within that final episode that Sanchez lose. The questionable outcome of a judge chosen by his fellow judges to win the whole shebang sat not well with Doom. All would be chaos. Chopped would be sullied. Ted may be soiled, and Doom would need avenge him, as if Doom needed one more $!#@ thing to do.

Clear heads prevailed, Doom suspects. Despite the presentation of a fair battle determined by their dishes, Doom contends the judges were nudged toward the eventual winner and made aware that a victorious judge chef may well have competed against such insensible things as grass and staplers and the Human Torch. By the heights of Latveria, even Doom could proclaim himself victorious against all simply by stating it so. 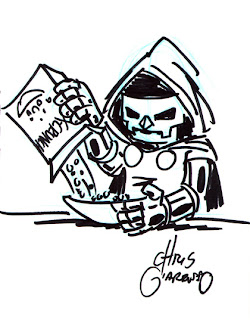